Filmmaker Sharon Arteaga had an unusual request when it came time for her Quinceañera. Instead of having a celebratory event, she convinced her mom to buy her a video camera. With it, Arteaga began making spontaneous films. A few years later, she started penning scripts.

Today, Arteaga has won numerous short film competitions, including being selected from hundreds of films to tour the US and Canada with LUNAFEST. She won the 2021 HBO Latinx Short Film Competition, and her short film, When You Clean a Stranger’s Home, is currently streaming on HBO Max.

Arteaga is currently developing her first feature film and is in post-production for the short film In Tow, about a mother and daughter who wake to find that their mobile home is being repossessed with them inside of it. The short was a 2019 finalist for the Tribeca Chanel Through Her Lens program and was awarded grants from various organizations, including the Austin Film Society, New Orleans Film Society, Santa Fe Film Institute, and the Mexican American Cultural Education Foundation.

Visuals had captivated Arteaga’s mind for years. She remembers watching the animated film The Brave Little Toaster in elementary school and a scene where a For Sale sign is being hammered down. Through a window’s reflection, appliances see the sign and their faces show sheer panic because their fates are unclear.

“That one-shot just said so much,” said Arteaga. “And I remember talking about the artistic choices made for it, and I was like, ‘Oh, people study this!’ There’s a lot to each film shot that tells a story. And storytelling was always a big thing in our household. I grew up in a pretty religious family, so a Bible story was always being told. And then, as a Latina, my grandma had all kinds of folklore she would share with us. She always found a way to make it sound very real by making it sound like her own personal experience.”

Early immersion in storytelling helped Arteaga create biblical skits for her church. She was asked to make a short film based on a religious story, which became a modernized telling of Saint Stephen’s tale for a teenage audience. Arteaga also made a more whimsical film about someone who loses a cow and goes on a journey to it. Every experience led to her loving the collaborative nature of filmmaking.

While in high school, Arteaga earned a cosmetology license to cut hair, which she did after graduation while applying to film school. She attended Del Mar community college, focusing on film and advertising, before working on her application for entry to the Radio-Film-Television department at the University of Texas at Austin. On her third try, she was accepted.

When You Clean a Stranger’s Home

Arteaga’s most recent award-winning short film, When You Clean a Stranger’s Home, focuses on first-generation high school student Abby and her mother. Together, they learn about people when cleaning their homes for a living. House decor and items left around convey a privilege that unveils Abby’s imagination, jealousy, and frustrations.

Trailer: When You Clean a Stranger’s Home from sharon arteaga on Vimeo.

In her director’s statement, Arteaga writes:

“When You Clean a Stranger’s Home” intends to honor and empower female domestic workers while exposing audiences to who they are as people and the next-generation Latinx perspectives held by their children.

Through the essay being narrated by the female protagonist, audiences will get an insight into social, economical, and professional disparities that next-generation Latinxs observe and the responsibility felt to change their family’s future.

It reveals the conflict of feeling held back by their circumstances while realizing crucial lessons learned within them. I intend to expose general audiences to these untold perspectives while giving Latinxs images and ideas with which they can identify.”

The film screened as part of the 2022 LUNAFEST lineup and is now streaming on HBOMax (Sol Bautista and Katy Atkinson pictured below). 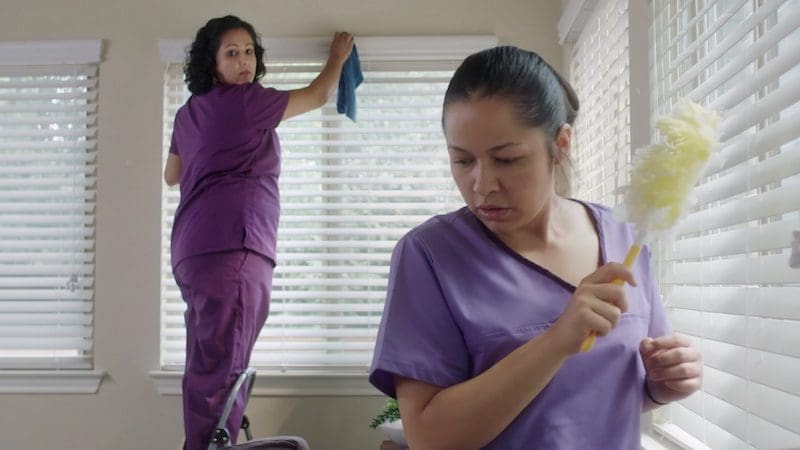 “I received a grant from the City of Austin, which allowed me to hire a 99 percent female, non-binary crew to create the film,” said Arteaga. “I remember what it was like to try and find entry points in my career and wanted to give people opportunities to build their resume.”

Since 2012, Arteaga has been a filmmaking mentor through the Austin Film Society. When asked what three pieces of advice she’d give to aspiring filmmakers, she shared,

1) “Study the business. You don’t have to major in business, but just look around and see how people are operating teams and how money gets raised because you need funding. There is a lot of creativity in business and fundraising. It’s just a different type.”

2) “Always get others’ eyes on your work. We’re creating for audiences and not ourselves. So I always put my films through some kind of feedback process. My common practice is to put it through two different audiences and to have a diverse makeup within those audiences. I invite people from different ages, backgrounds, and demographics to see how people respond.”

3) “Find community because I could not be where I am today if it weren’t for surrounding myself with people who encouraged me, supported me, and made efforts like feeding and housing a film crew. Everyone can play a different part in helping push you and your stories forward. I joined support groups; I look for organizations in town that I can support or that we can mutually support each other.”