Interior designer Jany Lee remembers constantly rearranging her room as a child. She was also a fan of hand-sewing old clothes together to make t-shirts or make Halloween costumes. Being creative is when Lee is most happy, and those feelings serve well as she helps clients remake their homes into beautiful spaces reflecting their personalities.

Lee spoke with Girls That Create about her inspirations, career, and advice she’d give her childhood self. An avid world traveler, she has called the countries South Korea, Canada, and the United States home. Lee also had the opportunity to compete on HGTV’s Design Star for its fourth season.

How did you learn about design?

In Toronto, my parents owned a convenience store. I started working there around age 12 and began reading every magazine about design that came through the door. This time was way before the Internet. I trained my eye to recognize what elements make a room beautiful and functional.

When it was time for college, I wanted to attend Ryerson University to study interior design. But my parents were concerned I couldn’t make a successful living in a creative field. They suggested I attend Queens University instead, which is a great school. I did go there and ended up majoring in economics. It also happens to be where I met my husband, so in hindsight, everything happened for a reason.

Besides design, what else did you learn while working in your parent’s store?

A lot about working hard, staying consistent, and working long hours: the store was open from 9 a.m. to 11 p.m. every day. We would often celebrate twice during holidays, once earlier in the day and after the store closed when my father came home.

What did you do after graduating from Queens University?

I worked for an investment firm. I wore the suit and learned about stocks, bonds, and investment trading. It was a successful career, but I was not happy. After three years I began working for a tech company, but even that didn’t feel right. So I started doing interior design work on the side. My first big project was a main office in Toronto. I then began decorating condominiums and other homes, getting jobs through word of mouth. Then turning 30 meant it was time for an even bigger change.

I went into a travel agent’s office and told them I wanted to book an around-the-world trip. I was fortunate to have enough money saved to purchase the ticket and take off for over a year of solo traveling. My husband, then fiancé, gave me a new backpack for Christmas, and I left on January 8. Traveling over 20 countries opened my eyes to ideas and concepts I’d never imagined. It was an experience that greatly influenced my take on design. 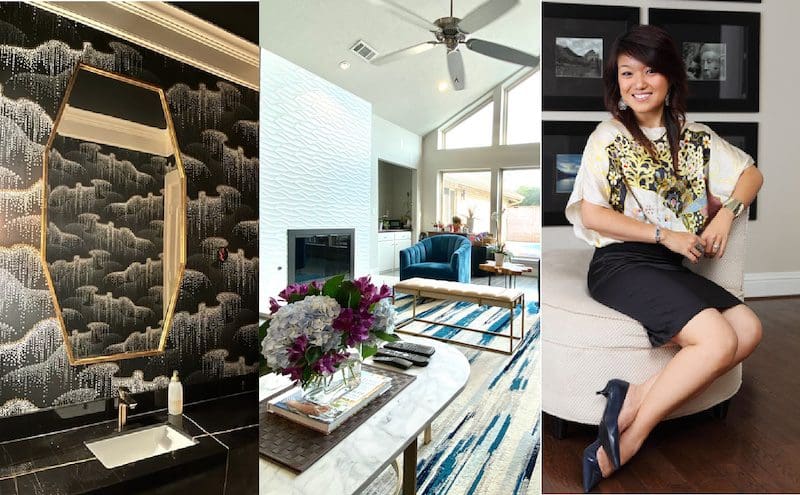 How did you end up in the United States and what projects did you become involved in?

I came to Dallas, Texas, to be with my husband after we married. We bought a fixer-upper house, and I spent eight to ten months working on it, learning all about the good and bad of renovations. I’d been watching a lot of HGTV during that time, and as our house project ended, I saw an advertisement for their reality show Design Star. I put together a three-minute video about who I was and submitted it. Long story short, they called, flew me to Los Angeles, and I became part of the cast for season four.

What were the positives of being on a reality show?

I loved meeting some incredible designers. The winner of my season, Antonio Ballatore, is a great guy. The experience also helped me understand how hard it is to make a TV show. Viewers see a final product, but there’s this entire team of editors, producers, and directors that we never see. To get that firsthand insight was incredible. I also had to adapt to making decisions quickly, because there wasn’t any time to consider choices. There were moments when I had five minutes to make a decision. The challenge would be lost if I couldn’t make a quick choice.

What did you find most challenging about being on Design Star?

Lack of sleep! We could only sleep for four hours per night because of the production schedule for the show. Having to design and make decisions on minimal sleep was the hardest thing for me. If a project wasn’t finished by 1 a.m., so be it. We had to get the projects done, and there was no in-between where we could consult with the client or adjust the deadline. No adjusting, no excuses. Either they liked what I did, or they didn’t. It was good practice for all the sleep you lose when having children.

How do you balance your passion for creating with the everyday demands of motherhood? What’s the most challenging?

It’s definitely managing time. I need an outlet for my creativity to be my best self for my kids. If you want to be a wonderful parent, you have to be full inside. It’s a constant struggle to balance both, and I don’t get much sleep. The most important thing for me is when I’m with the kids, I’m 100 percent focused on them and present with them. When they’re in school, I try to be very efficient with my time to design and get things done on a tight schedule. But when you have so much on your hands, it’s easy to feel overwhelmed. I just do my best on a daily basis.

If you could go back in time, what advice would you give your younger self?

Don’t overanalyze too much. Go with the flow, embrace the moments that come, and appreciate the little things. Make sure you practice gratitude every day. It’s an amazing emotion that you can and should experience whenever possible.