With every political or social movement, a specific accessory emerges. Often fastened to jackets, blouses, bags, and even shoes, I am, of course, talking about buttons. Since the country’s beginning, these adornments have been part of the United States’ scenery. During the first presidential inauguration, George Washington’s supporters wore copper buttons with his initials in the center. A chain surrounding the button’s rim had links representing each of the original thirteen states.

Just a few words or a simple image can convey a powerful message. Supporters of the woman suffrage movement wore buttons to express their belief that women deserved the right to vote. When 168 women suffragists were released from jail in 1917 for picketing the White House, they each received a Jailed for Freedom pin. During her tenure as Secretary of State, Madeleine Albright famously wore pins to express opinions when meeting with members of government at home and abroad. On good days she wore flowers or butterflies; on bad days, bugs and carnivorous animals.

How to Make Your Powerful Button

Sit down with the girl(s) in your life and create your own buttons. Purchase a kit of snap-together craft buttons. Get out markers, pens, crayons, scissors, and a couple of cardstock pieces. Discuss the details chosen for the designs (colors, images, wording, placement). What messages do you each hope the buttons communicate? What are the meanings behind the chosen symbols? Turn your drawings into memorable button keepsakes. 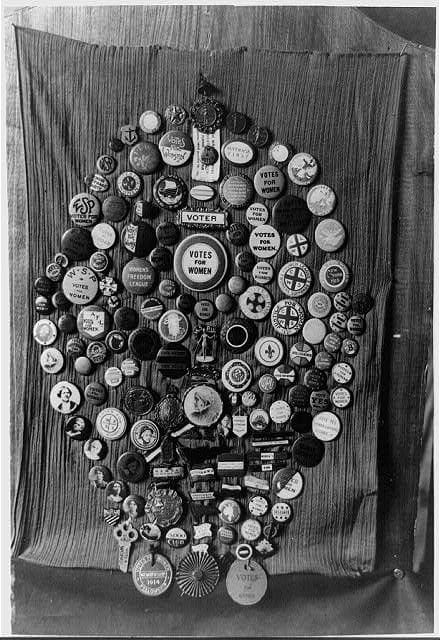 Collection of “votes for women” buttons made by Mrs. Alice Park of Palo Alto, Calif. Library of Congress.

The Busy Beaver Button Museum has put together an online publication about buttons’ history. Busy Beaver Button Co. started the museum and is a woman-owned business based in Chicago. It is an excellent resource if you need 50 plus buttons printed.

In 2009, Madeleine Albright spoke with NPR about her pins and shared some of the stories behind their meaning. You can see her collection in the book Read My Pins: Stories from a Diplomat’s Jewel Box.

Madeleine Albright talks about her pins on exhibit at the Smithsonian Institution.

Ken Hubbard reflects on lessons we can learn from his massive collection of presidential campaign buttons.

Self-Esteem Activity for Girls: What I Like About Me