Light a match and watch till it goes out. Go to the middle of Central Park Pond and drop all your jewelry. Scream against the sky. When a young Yoko Ono formulated these actions in the 1950s and 1960s, they heralded a bracingly quirky vision for the arts as a therapeutic practice of everyday life – a vision that anticipated an ethos of self-care that’s widely embraced today.

Self-care, which refers to what individuals do every day to stay mentally, emotionally and physically healthy, has diverse origins in medical research and in the Black liberation movements of the 1960s and 1970s. The practice has become more popular over the past decades, so much so that the beauty and fitness industries have co-opted it as a powerful marketing tactic.

To Ono, however, self-care means more than just spa indulgence. Instead, it possesses myriad dimensions: focusing the mind, gathering energy for action, connecting one’s imagination with the world, finding empowerment by connecting with others, and stimulating thought through humor and play.

The Young Artist and the Refugee

When I came across a cache of poems that Ono had written as a young woman in the 1950s, I knew almost nothing about her personal history and philosophies. The works were mysteriously stashed in the archives of a German-Jewish refugee classical composer named Stefan Wolpe, whose life and work I was studying.

As a teenager after World War I, Wolpe had lived on the streets of Berlin until he made his way to the Bauhaus, the experimental progressive art school, where he embraced ideas of art therapy espoused by social worker-psychotherapist Steff Bornstein and artists Friedl Dicker, Johannes Itten and Gertrud Grunow.

Wolpe, forced to flee Germany in 1933 as the Nazis came to power, was separated from most of his family, including his daughter, who spent World War II in a Swiss orphanage.

After the war, Wolpe drew on his education as a resource, turning to music composition as an imaginative realm to model the wonder of fragile beginnings in the midst of dire constraint and unfathomable loss.

Around 1957, Ono befriended Wolpe, who was over 30 years her senior, and his wife, the poet Hilda Morley. Ono enjoyed tea in their Morningside Heights home in New York City, indulging in “the intellectual, warm, and definitely European atmosphere the two of them created.”

Ono would later write that she was “surprised by how complex, precise, yet emotional his works were. I don’t know of any other composer of the time who represented atonal music so brilliantly.”

United by Trauma and Displacement

Ono’s poems, which evoked scenes of hunger, terror and beauty in a snow-filled landscape, seemed strangely resonant with the life of Wolpe, who was haunted by his traumatic flight from Germany. Later, I realized his experiences were connected with Ono’s own story of displacement and violence.

As an adolescent, Ono had begun to discover her own calling as an artist in the cold countryside outside of Nagano, Japan, where she and her family had fled as refugees after the Tokyo fire bombings in 1945.

This was the imaginative terrain of the poems she shared with Wolpe:

When day comes, we ask ourselves:
Where can we find light
In this never-ending shade?
The loss we carry, a sea we must wade.

Without food or adequate shelter, she had spent her days with her younger brother conjuring alternatives to the hopeless circumstances around her. As she recounted in an interview with curator and Asia scholar Alexandra Munroe, “lying on our backs, looking up at the sky through an opening in the roof [of a barn], we exchanged menus in the air and used our powers of visualization to survive.”

Ono came to recognize imaginative acts as necessities in life. Under these desperate conditions, she wrote, “we needed new rituals, in order to keep our sanity.”

Around the time she met Wolpe, Ono was estranged from her parents after she had made the unconventional choice as a woman to pursue a career in the arts.

Later, writing and sharing poetry with Wolpe would be one example of such an imaginative ritual – an instance of care both for herself and for her émigré friend. Wolpe and Morley preserved Ono’s own typewritten poems as cherished documents, even rescuing them from a terrible apartment fire. 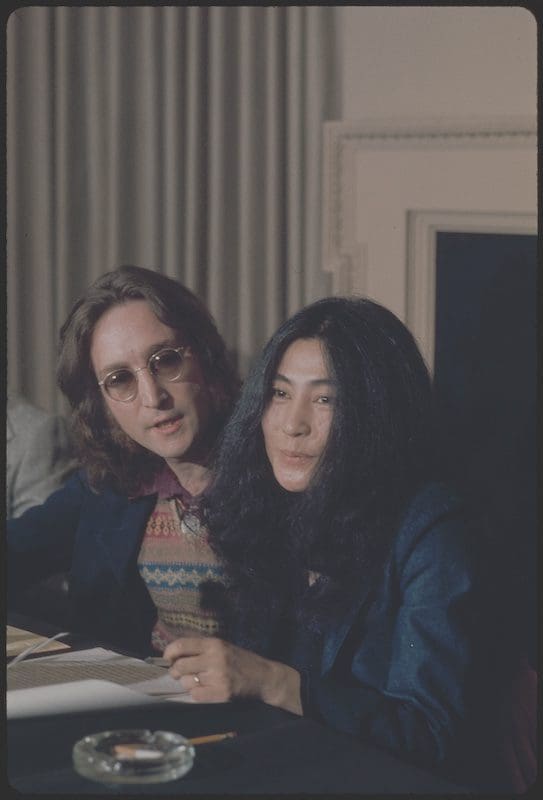 Ono’s commitment to regenerative rituals would form the basis for her career in the arts.

At first, these exercises were private and personal. Imagining a menu would stave off hunger. Screaming against the sky would give shape to extreme emotions. Lighting a match and watching its flame extinguish would quiet the mind.

Eventually Ono would come to disclose such rituals to the public, inventing a new form of art in the process. Equipped with these exercises – what she called “instruction pieces” – she established herself as a founding mother of the 1960s performance and conceptual art movements. As a Japanese woman artist and peace activist, she frequently confronted gender and racial bias. But her ethos of art as survival sustained her.

Ono’s book “Grapefruit,” first published in 1964, is a cult classic dedicated to the idea of art as a form of self-care. Written in the imperative mood, it instructs readers in how to realign their perceptions, imaginations and actions in relation to the world.

Ono’s directions mix together the earnestly mindful, the psychedelic and the wry:

“Imagine one thousand suns in the sky at the same time. Let them shine for one hour. Then, let them gradually melt into the sky. Make one tunafish sandwich and eat.”

The Art of Survival, Then and Now

Ono’s ideas are often far out and witty. Yet the relevance of her ethos of art – and even her instruction to eat a sandwich – is serious.

According to the American Psychological Association, in the U.S., “32% of all adults are so stressed” that they “cannot make basic decisions such as what to eat or what to wear.”

These numbers are far higher for people of color and young adults who, like women, face disproportionate economic insecurity and other forms of hardship. These facts call out for rethinking what self-care actually means and how it pertains to the arts.

During the current pandemic, it is no surprise that art therapy has become a focus of debate and experimentation. The tools of this practice, which include coloring books and emotion wheels, may seem galaxies away from the museum world that celebrates Ono’s legacy. Yet, from a certain perspective, it is oddly close to her spirit.

In an era of political turmoil and economic instability, I believe such an accessible vision of art as Ono’s can be a resource for psychic survival, community and resilience – connecting people with prior struggles in ways they might not have imagined.

Such an approach to engaging with the world can help individuals to shift perspective to simply get through the day, or it can lead to dazzling, incongruous visions that transform ideas about what the future may hold.

Yoko Ono’s Prophetic Vision of Self-Care is republished from The Conversation under a Creative Commons license. Read the original article. The Conversation is a nonprofit, independent news organization dedicated to unlocking the knowledge of experts for the public good.

Have You Fallen for the Myth of ‘I Can’t Draw’? Do it Anyway – and Reap the Rewards