At the start of 2021 we don’t have to look far for reminders that in the hands of current powers, progress, equality, and empowerment are provisional and delicate social qualities. On the same day that Women Deliver hosted an online gathering of experts to discuss their report with Focus 2030 on gender equality, Poland imposed a near-total abortion ban.

We’re reminded this world, especially when it comes to women’s rights, is divided by borders and belief systems. Freedoms and equality expand in one country, while similar liberties are denied elsewhere.

While evolution will never be linear, it does appear to be exponential. The report, titled Citizens Call for a Gender-Equal World, surveyed 17,000 participants from 17 countries. It shows that despite traditionalist cultures and governments, citizens across the globe want a gender-equal world. The first-of-its-kind survey also states a resounding majority of citizens are ready for their governments to take action. 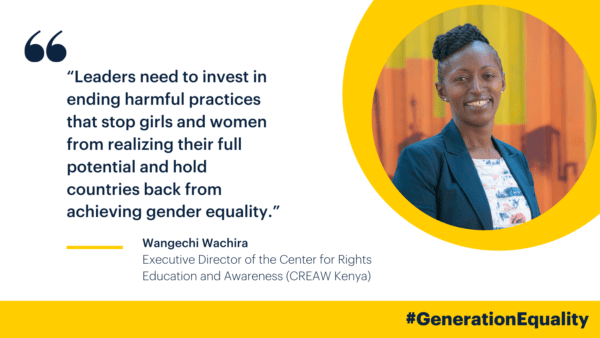 Wangechi Wachira, Executive Director of the Center for Rights Education and Awareness (CREAW) in Kenya, spoke to the results of increasing numbers of people advocating for women to have greater sexual and reproductive health rights (SRHR).

She highlighted the necessary considerations of leadership, cultural context, and prevention, stating:

“Leaders need to come out and be louder about genital mutilation. People running for leadership positions must have these issues at the forefront of their causes. Also, we need more female leaders. We need to look up the river. Who is benefitting from these outdated traditions? Yes, we need to be responsive, but we also need preventions in place. We are progressing and we are leaving one gender behind. We cannot truly evolve if we leave half the population behind.”

Delphine O, French Ambassador and Secretary-General of the Generation Equality Forum (GEF), also spoke to the SRHR-themed results, saying that one of the issues is the weak representation of women in parliament and governments.

Her research-backed suggestion as a way to improve representation is the introduction of quotas that require that women constitute at least a critical minority of 30-40 percent, in decision-making rooms.

More generally, she highlighted that the survey results were very validating, showing that public values mirrored and supported the vision of the GEF’s six action coalitions.

Chouaib El Hajjaji, Women Deliver Young Leader and Vice President at Attalaki in Tunisia, said the results help illustrate that “young people globally are some of the most committed to advancing gender equality.”

He also highlighted that many religions and cultures do not perceive women and men as equal, but young people are starting to dissect and question these old belief systems.

The panel agreed that young people have been little more than tokens around gender issues in the past.

It’s not enough to give young people a seat at the table, they need to be included and respected as partners, leaders, and active-decision makers.

Different generations must meet and create together. In terms of Generation Equality and the Action Coalitions: “The youth are the leads here. The youth need to be a decision-making part of this all.”

61 percent of survey respondents hope that their government will seize the GEF to increase funding for gender equality.

“The excuse of the world not being ready to act on gender equality cannot be used anymore. This report shows that the world is asking for it.” – Hanna Birna Kristjánsdóttir, Senior Advisor on Women’s Leadership at UN Women.

Governments and the private sector have a critical role to play in achieving a gender-equal world. Gender equality commitments must be matched with financing and accountability mechanisms.

The calls of citizens have to be backed by public and private investment in order for any real and lasting positive change to be realized.

Governments, private companies, and international organizations must ensure that investments, policies, and programs meet the needs of, and equally benefit, all girls and women, including young people and people from underrepresented groups. 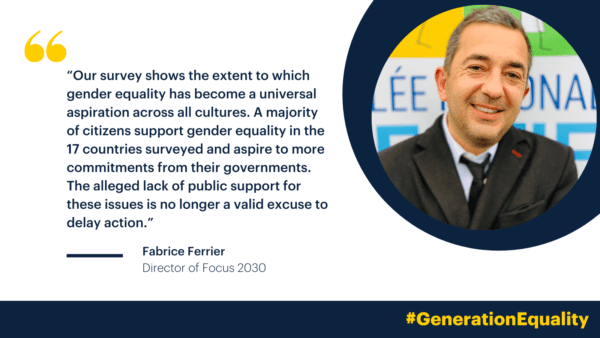 Despite 25 years of progress since the landmark World Conference on Women in Beijing, no country has fully met its commitments to gender equality. More than half of the world’s girls and women—as many as 2.1 billion people—live in countries that are not on track to reach key gender equality-related targets by 2030.

It’s clear that the majority public opinion is more enlightened, inclusive, and progressive than current political gender-equality progress. This is at once hope-instilling and frustrating. Society is finally paying attention and recognizing gender-equality as a social issue.

Women Deliver stresses a gender-equal world is healthier, wealthier, more productive, and more peaceful. The question we’re left asking is whether the correlating political paradigm shifts, policy changes, and targeted interventions will emerge and have a sustainable impact.

You can read the full survey here.
You can access the presentation report here.
Want to spread the word about gender equality? Access shareable social media graphics, infographics, and more here.

Four Actions to Raise Your Girl Into a Natural Leader

Make Your Own Powerful Button