When visual artist Marilyn Artus realized 2020 marked the 100th anniversary of the 19th amendment, she knew something both extraordinary and large-scale needed to happen. From the mind of this self-proclaimed “suffrage era nerd” came Her Flag, a nationwide art and travel project that celebrates women winning the right to vote and recognizes the 72-year struggle to make it happen.

When she was fourteen years old, Artus took a school trip to Washinton D.C. and its Smithsonian Museum. While there, she saw the Star-Spangled Banner, which hangs in the National Museum of American History. This colossal flag, made by Mary Pickersgill, flew over Fort McHenry in Baltimore during the war of 1812. It is the inspiration for the poem by Francis Scott Key that later became the national anthem of the United States.

“Here was a moment in history that I could relate to,” Artus shares on the Her Flag website. “A woman had created this important thing — it was sewn by her hands, just as a young girl I had watched my mother sew clothes for me. To this day, my experience at that museum manifests itself in my art-making.”

Artus determined she would create a new flag to be both a thank you and love letter to the 36 states that ratified the 19th amendment into law. She mapped out travel to each state in order of ratification, with Tennessee being the final stop on August 18, 2020.

Thirty-six women artists (one from each state) would collaborate with Artus to create the 18×26 foot flag. The women would make stripes representing their states, with Artus then adding those pieces to Her Flag. Sewing the stripes onto the flag would take place in state capitals at public performances. Over 340 applications came in to be one of the 36 who would eventually participate.

Through her work, Artus explores the female experience within her art-making practice. She grew up in Norman and Tulsa, Oklahoma, and spent two years at the University of the Incarnate Word in San Antonio, Texas. Artus then returned to Oklahoma to finish her fine arts degree in printmaking at the University of Oklahoma. She spent time as a designer in the gift industry before becoming a full-time visual artist in 2008.

Two years later, she led an art-making workshop at the Brooklyn Museum in New York in association with the retrospective exhibit ‘Seductive Subversion: Women Pop Artists, 1958-1968. Artus is also the first to receive the annual Brady Craft Alliance Award for Innovation in fiber arts.

Artus made it to 25 of 36 states before COVID-19 halted the road trip. Undeterred, she turned to live-streaming from her home. Each stripe sewing was broadcast, with Artus adding the final piece in Tennessee on the 19th amendment’s official anniversary. The stripes vary in design and theme. Some artists commemorate notable women from the suffrage and civil rights movement, while others incorporate portraits of contemporary women and girls, highlighting the legacy of suffragists in today’s social justice activism.

Her Flag debuted at the Clinton Presidential Library in Little Rock, Arkansas, on August 26, 2020. Earlier this summer, the work hung at the National Museum of Women in the Arts in Washington, D.C. You can purchase signed prints or a physical Her Flag online. 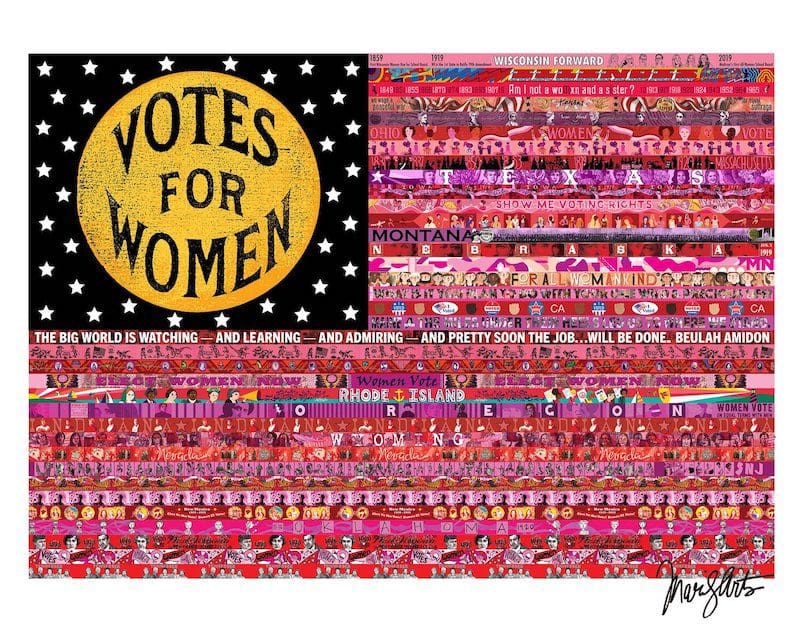